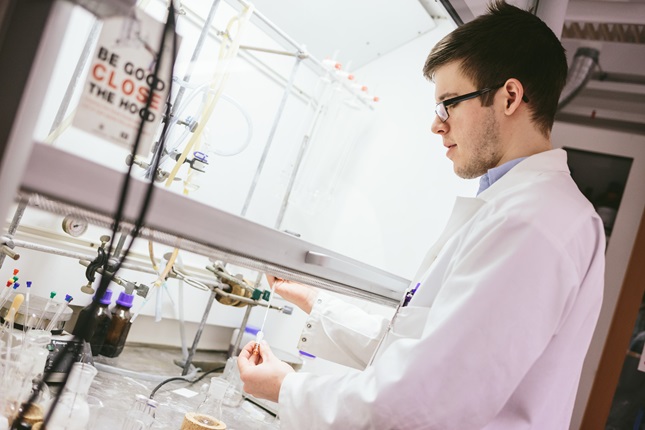 Researchers manufacture and analyse the breakdown products, known as "metabolites", from various illegal drugs. These metabolites are important when detecting drugs in urine samples. Erik Vestling, a master´s student in medicinal chemistry, is working in the bench. Anna Nilsen 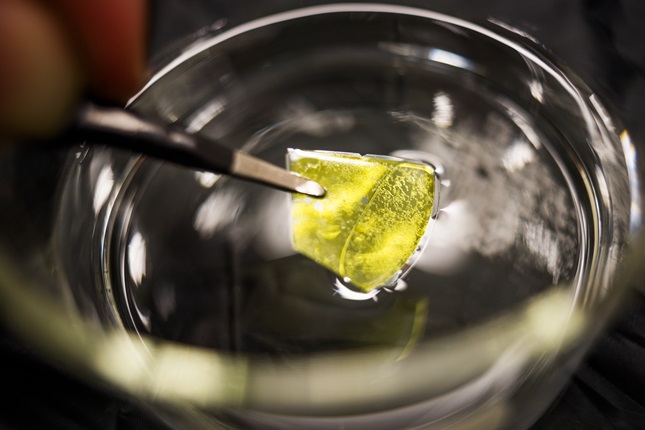 LiU researchers use the semiconductor material shown to investigate whether it is possible to convert carbon dioxide and water to hydrocarbons that can be used as fuel. This would contribute to reducing emissions of carbon dioxide to the atmosphere. Thor Balkhed 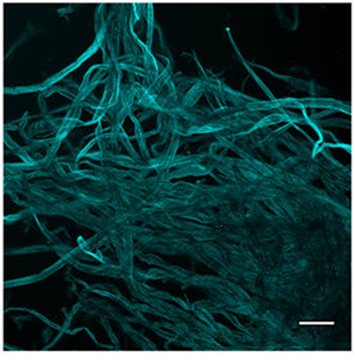 Molecules that change colour when they bind to a substance of interest, in this case cellulose, have been developed by researchers in chemistry at LiU. Possible fields of use for these molecules are found in various medical and industrial applications.

Everything around us is built up from different combinations of the elements of the natural world. This means that fields as diverse as medicine, biology, engineering, geology, materials science, meteorology and environmental science all depend in one way or another on a knowledge of chemistry.

Life itself is a quintessentially chemical process, and biological chemistry has a prominent position at LiU. A detailed understanding of the processes of life can be obtained only by studying biological molecules.

This is particularly true for proteins, which are important building blocks in the body and control all the chemical reactions that take place in the cell. Protein molecules are built up from thousands of atoms, and the complex shape of a protein molecule determines its biological function. It has become clear in recent years that many serious diseases, such as Alzheimer, Creutzfeldt-Jakob (“mad cow disease”) and Parkinson, are a result of proteins irreversibly adopting the wrong structure. Research has for this reason been focussed on understanding how the complicated structures are formed and why sometimes things go wrong. Chemistry researchers at LiU are also developing reporter molecules and drugs to use in the diagnosis of these diseases, and to block the harmful proteins. Proteins involved in the development of cancer, malaria and infectious diseases are also intensively studied, using the most advanced equipment available.

LiU researchers also participate in the fight against “designer drugs” or “legal highs”, which have rapidly become established on the illegal drugs market and constitute a serious social problem. The scientists are developing new interesting methods to detect unknown enzymes in microorganisms. These can then be used in biotechnology applications, one example of which is the more efficient production of biogas.

Advanced research into materials science is also a feature of chemistry research at LiU, involving both experimental and theoretical studies. One important region is the manufacture of new electronic materials using a method of synthesis known as “chemical vapour deposition” (CVD). This method has played a crucial role in the development of modern electronics devices such as mobile phones and computers.

In the field of energy, the researchers are particularly interested in the possibility of reusing carbon dioxide, together with hydrogen gas, to produce energy-rich hydrocarbons, methanol and dimethyl ether, as fuels for a sustainable society. Interest in this case is principally directed towards the catalytic processes that promote the reaction between carbon dioxide and hydrogen gas. Theoretical modelling plays a central role in research into CVD and into carbon dioxide reuse. The materials science research for this reason has its roots in not only inorganic chemistry but also physical chemistry.

We want to explore the evolutionary relationship and functional repurposing of human proteins acquired by picornaviruses to develop new antiviral medicine and help gain better understanding of the lifecycle of these biomedically important viruses.

Scientists are now able to label proteins in the brains of mice who have a disease similar to Alzheimer’s disease. The new method allows the researchers to observe how harmful protein aggregates develop over a longer time period.

Two pieces of the Alzheimer’s puzzle

One is a protein chemist, the other a physician. Both conduct research into Alzheimer’s disease. Each benefits from the knowledge of the other, making progress more rapid. Their objective: to make a difference for those affected by disease.

Scientists have for the first time seen how the MYC protein, which plays a central role in cancer, binds to a key protein and controls important functions in cells. The new discovery may in the long term help in the development of new cancer drugs.

NIH research grant to study harmful proteins in the brain

Fluorescent tracer molecules developed by scientists at LiU will be used to develop new diagnostic methods in dementia. Peter Nilsson and researchers at Indiana University have now received a grant from the National Institutes of Health in the USA.

Chemists at Linköping University took their inspiration from nature when designing a new molecular motor to convert light energy into motion. The motor has a minimal structure, but even so satisfies several important functional criteria.

NSC at LiU to install Scandinavia’s most powerful supercomputer

Swedish researchers will gain access to significantly higher computing power when the most powerful computer in the Nordic region, Tetralith, is installed at National Supercomputer centre. The maximum speed is estimated to be just over 4 petaflops.

Amyloid beta, a protein linked with Alzheimer's disease, has different properties in different cell types in the brains of fruit flies, according to a new study. It seems that certain cell types are hardly damaged at all by amyloid aggregates.

LiU team awarded silver medal in an international competition in synthetic biology, with project on protein folding in Alzheimer’s disease.

The brain of a person with Alzheimer´s disease often contains several different types of amyloid plaque. This was shown in a study in which tracer molecules developed at LiU were used to study brain tissue from patients.

Water + carbon dioxide + sunlight = fuel. Jianwu Sun is working on an approach that may be able to reduce the emission of carbon dioxide to the atmosphere.

Molecules that change colour can be used to follow in real-time how bacteria form a protective biofilm around themselves. This new method may become significant both in medical care and the food industry, where bacterial biofilms are a problem.

Researchers from LiU have developed a molecule that changes colour when it binds to different forms of cellulose. The researchers demonstrate how the molecule can be used to make rapid, optical measurements of cellulose quality.

Environmental chemists are now questioning whether it is the Zika virus that is behind the birth defects in Brazilian children. LiU researchers will be investigating whether the cause could instead be an insecticide against mosquitoes.

Blocked prions may be a cure for mad cow disease

Creutzfeldt-Jakob disease, mad cow disease and scrapie are brain diseases for which there is currently no cure. But now, with the aid of a particular molecule, LiU researchers may be able to prevent destructive prions causing cell death in the brain.

Advanced simulations and models allow researchers to solve complicated problems. Researchers at LiU use theoretical modelling to study everything from processes in biological ecosystems to how the universe functions.