Coming soon to a window near you

Progress in research into organic solar cells has been rapid in recent years. These cells are environmentally sensitive, can be printed onto large surfaces, and open completely new possibilities for husbanding the energy of the sun. 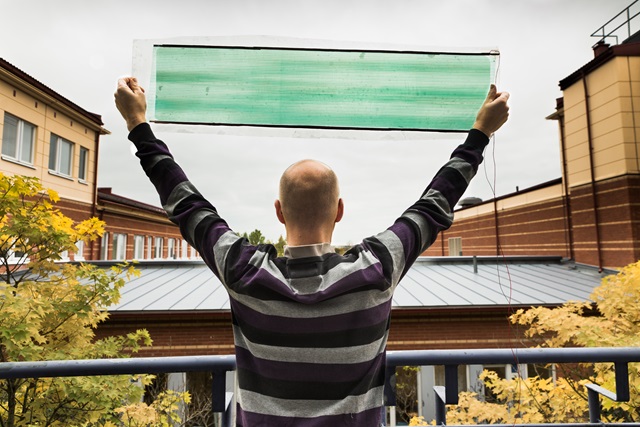 Photo credit: Thor BalkhedWhat about printing organic solar cells onto windows not only to give shade but also to generate electricity, or built into a handbag to charge a telephone?
Two of the most highly cited researchers in the world in this field are active at Linköping University: Fengling Zhang and Olle Inganäs, both of them professors of biomolecular and organic electronics. They are not working on their own: the group around them includes Feng Gao, senior lecturer in the field, together with Mats Fahlman, professor in surface physics and chemistry, and Martijn Kemerink, professor of complex materials and devices, to name just three. At the Department of Physics, Chemistry and Biology alone, for example, around 20 doctoral students were working on organic solar cells in the autumn of 2016.

The most prestigious journals

The results of the hard work of these scientists can be seen in the most prestigious journals throughout the year: Nature Energy, Science, Advanced Materials, and several others. The research is advancing along many fronts and in collaboration with researchers in China, Germany and the US.
A recently concluded EU project, Sunflower, in which Mats Fahlman and his group took part, has shown that the environmental impact of the organic solar cells is very small. In addition, they discovered new combinations of materials for the next generation of organic solar cells.
The material is, namely, the key in the quest for evermore efficient organic solar cells. The researchers test new polymers and are seeking more efficient acceptor materials, which help to release the charge carriers in the solar cells and initiate electricity production.
Combinations of materials containing polymers and a stable acceptor have given the best solar cells currently available, where Fang Gao, Fengling Zhang and Olle Inganäs are holders of the world efficiency record: 11%.
This means that 11% of the energy in sunlight can be converted to electricity with the aid of plastic solar cells. However, the researchers expect better results.

This summer saw a further breakthrough in the field: combinations of materials in which not only the speed of transport of charge carriers to the electrodes is higher, but also the parameter known as the driving force - which is the energy that must be used to release electrons in the polymer - is lower. The driving force in the organic solar cells is approaching the driving force of silicon-based solar cells, which makes them increasingly interesting for commercial manufacture. 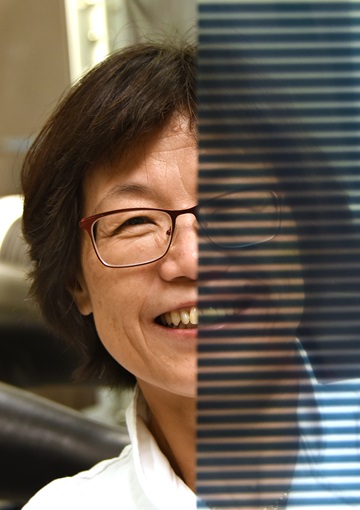 Photo credit: GORAN BILLESON
Fengling Zhang is working intensely to make solar cells easy to manufacture. New materials in the electrodes and a very thin layer next to them that allows only positively charged particles to pass through on one side and only negatively charged on the other, are two of her many contributions that increase the efficiency of the organic solar cells.
She is also working with new methods to achieve an even quality across the active layer when the solar cells are to be produced, printed, onto large areas.
The printed, flexible organic solar cells are on their way out from the laboratory, in work being done in collaboration with  Tekniska verken in Linköping. Solar cell modules have been mounted onto windows at Tekniska verken and at Linköping University. This is part of the work to evaluate the manufacturing methods for semitransparent solar cell modules across large areas.
“It’s only a couple of years ago that we started to raise the efficiency of organic solar cells from a few percent to today’s level of 11%, so you can see that development is rapid,” says Fengling Zhang. She shows the most recent Chinese call for applications in which large grants are available for research into optical energy conversion and flexible organic solar cells.

Many of the doctoral students who work with solar cells at LiU are from China. The US and the EU are also investing heavily in the field, while Swedish efforts are small.
“We would never be able to conduct the research with Swedish money alone. This technology can solve the world’s energy problems in an environmentally sensitive manner, but this is something that few Swedish funding agents have realised,” Olle Inganäs concludes.
Fengling Zhang agrees: “We would dearly like to have more Swedish doctoral students.”
The theoretical limit for the fraction of the sun’s energy that can be obtained in solar cells is around 33%.  Laboratory experiments with silicon-based solar cells have achieved 25% at best. The limit for organic solar cells is lower.
“Most people say 15%, but I’m convinced that 20% can be achieved,” says Fengling Zhang.
If you instead measure energy, rather than power, the organic solar cells will very soon be on a par with silicon-based cells.
“Organic solar cells give 30% more energy than silicon-based cells. If we can manage to gather 15% of the energy from organic solar cells, this would correspond to the current efficiency of silicon-based cells, 18-20%,” says Olle Inganäs.
We can hope that the day is not so far away, not with all of the work that is being carried out around the world in which LiU, despite a low level of Swedish financing, is well to the fore. These cells may very well be on a window or handbag close to you in only a few years’ time. 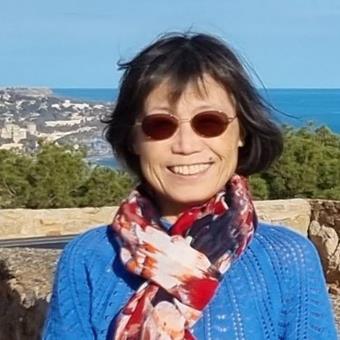 Solar cells manufactured from materials known as “perovskites” have advantages of low cost and short energy payback time. However, such solar cells have problems with stability – something that researchers at LiU, have now managed to solve.

A small guest molecule in the right place makes it possible to produce energy-efficient organic solar cells using eco-friendly solvents. A record efficiency over 17% is demonstrated. In addition, solar cells with larger areas can be produced.

A career in the company of organics and perovskites

Feng Gao, appointed professor at LiU 2020, has climbed rapidly up the research career ladder, from China, via the UK to Linköping. Driven by curiosity, a desire to work in a field that is of real benefit, and a wish to support young researchers.

A combined optical transmitter and receiver

Researchers at LiU, together with colleagues in China, have developed a tiny unit that is both an optical transmitter and a receiver. “This is highly significant for the miniaturisation of optoelectronic systems”, says LiU professor Feng Gao.

Researchers at Linköping University, working with colleagues in Great Britain, China and the Czech Republic, have developed a perovskite light-emitting diode (LED) with both high efficiency and long operational stability.

Researchers at LiU have discovered a quantum phenomenon that influences the formation of free charges in organic solar cells. “If we can properly understand what’s going on, we can increase the efficiency”, says Olle Inganäs, professor emeritus.

At spin-off company Epishine, the printing presses are feeding out solar cells in printed electronics intended for indoor use. Olle Inganäs has an even higher goal: organic solar cells will contribute to solving the world’s energy problems.

Two LiU researchers each receive around SEK 34 million for five years from the Knut and Alice Wallenberg Foundation. Håkan Olausson is working on ultrafast pain signalling, while Feng Gao is developing new materials for solar cells.

Swedish and Chinese scientists have developed organic solar cells optimised to convert ambient indoor light to electricity. The power they produce is low, but enough to feed the millions of products that the internet of things will bring online.

Scientists at LiU working with colleagues from China have shown how to achieve efficient perovskite light-emitting diodes (LEDs). In an article in Nature Communications, they provide guidelines on fabricating high-quality perovskite light emitters.

Efficient near-infrared (NIR) light-emitting diodes of perovskite have been produced in a laboratory at Linköping University. The external quantum efficiency is 21.6%, which is a record. The results have been published in Nature Photonics.

Scientists Feng Gao and Daniel Aili, both at the Department of Physics, Chemistry and Biology, have been awarded research grants from the Horizon 2020 Marie Skłodowska-Curie Actions. The amount involved is approximately EUR 600,000 for 2 years.

Only now in 2018 have researchers successfully demonstrated that hypothetical ‘particles’ that were proposed by Franz Preisach in 1935 actually exist. In an article published in Nature Communications, scientists show why ferroelectric materials act as they do.

Twenty-five researchers from seven research institutes have put their heads together to draw up rules for designing high-efficiency organic solar cells. The research, led by associate professor Feng Gao, have been published in Nature Materials.

A further step has been taken along the road to manufacturing solar cells from lead-free perovskites. High quality films based on double perovskites have been developed in collaboration between LiU and NTU in Singapore.

The ability to use cheap materials and simple manufacturing methods are two huge advantages of printed organic solar cells. Olle Inganäs and his research group has now developed an even simpler method to manufacture solar cell modules.

Feng Gao is one of 24 promising young researchers who have been named Wallenberg Academy Fellow. He will now receive further funds to continue developing a new type of material known as “perovskites”, well-suited for use as solar cells and LEDs.

The light comes from LECs

Researchers at Linköping University and Umeå University have succeeded in increasing the efficiency of light-emitting electrochemical cells so their luminance equals that of a panel of OLEDs, and their efficiency is on a par with a fluorescent lamp.