Can annealing enhance the crystalline quality in diboride superlattices?

Artificial superlattices are nano-layered structures of two different materials that do not occur in nature. Superlattices, when carefully designed and synthesized, have demonstrated properties that cannot be obtained in the natural form of crystals. One approach to grow single crystal superlattices is by magnetron sputter epitaxy.

We have recently grown CrBx/TiBy superlattices by DC magnetron sputtering from compound CrB2 and TiB2 targets (non-reactive sputtering) as a first-ever such an experiment on diborides. We obtained the deposition parameters to grow promising superlattices; however, high-resolution microscopy shows that the achieved nanostructures are still not ideal due to boron segregation in the nanostructure (Fig. 1), which is more pronounced in the TiBy layers. This segregation is attributed to excess boron, as sputter-deposited TM diboride thin films are often over-stoichiometric (B/TM ratio > 2).

One strategy to resolve this issue and increase the crystal quality can be engineering their nanostructure by a post-annealing process. It is expected that a controlled post-annealing process can lead to an atomic re-arrangement, in the direction of thermodynamic equilibrium and consequently, influence the huge as-grown boron segregation. To assist in finding the right post-annealing approach in terms of temperatures and even initial as-grown layers design, theoretical calculations will be applied. This theory will also answer questions of two kinds: about the thermodynamic equilibrium, in terms of Free energy minima, towards which the as-grown material will strive, and about the kinetics of boron and metal diffusion in and between the layers governing the hierarchy and time scales of various kinds of transformations in the layers. 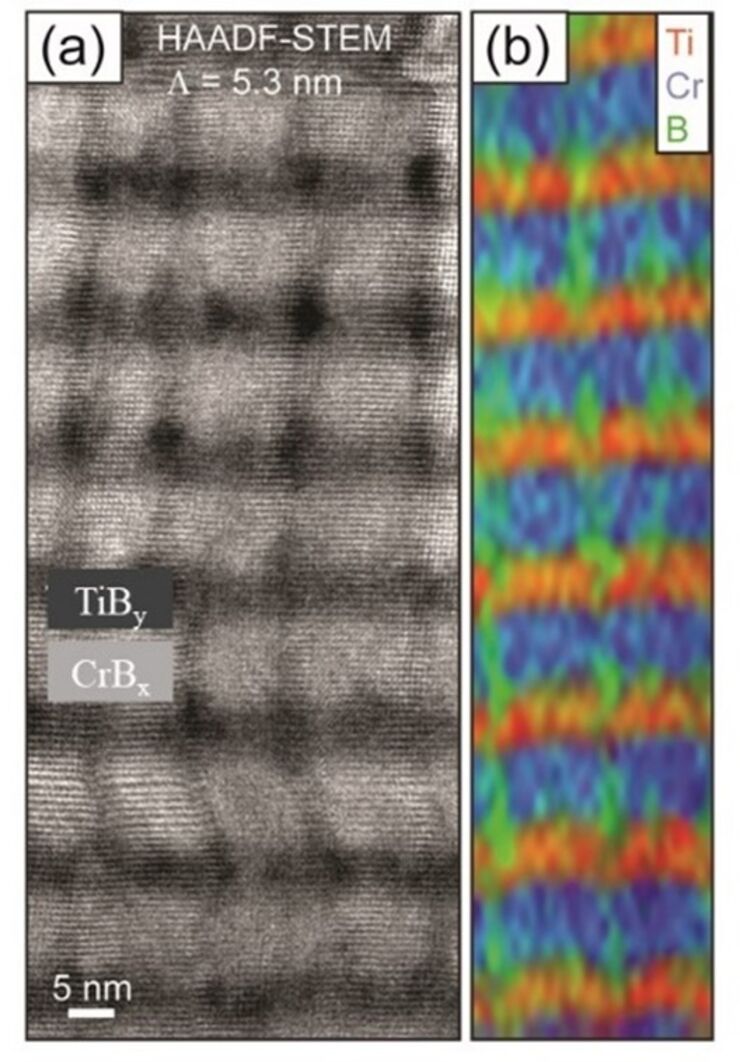 Fig. 1. (a) HAADF-STEM of CrBx/TiBy superlattices with modulation period Λ = 5.3 nm, (b) Ti, Cr, and B (EELS) maps from a similar neighboring area

Organic solar cells (OSCs) are a promising technology to utilize solar energy because of its low-cost, lightweight physical characteristics, and the lucrative possibility of integration directly into flexible and wearable electronic devices. Recent development in non-fullerene acceptors (NFAs) have successfully boosted power conversion efficiencies (PCEs) of OSCs to high values over 18%, approaching the commercially viable efficiency goal. However, the large donor/acceptor (D/A) interface in bulk heterojunction structure can not only render exciton formation and dissociation, but also increase the energy loss, which limits the further improvement in the OSCs. The energy is believed to loss from extra non-radiative recombination in both charge transfer and transport process. Therefore, it is important to undersantand the mechanism and influencing factors of the charge recombination at D/A interface in the OSCs.
In this project, we are aiming to explore transition metal oxides as interlayer for efficient and stable bilayer-heterojunction OSCs. The transition metal oxide interlayer with optimized band gap and morphology will be produced using magnetron sputtering. The interfacial stability of complete OSCs through tailoring the interlayer materials and the interfacial contacts will be further studied. Moreover, the mechanism of exciton diffusion will be revealed for paving a way to address the energy loss issue in OSCs.

In this project, we aim to create optoelectronic devices with superior luminescence capacity based on our skills in device fabrications and ab initio simulations of functional materials. A collaboration of experimental and theoretical physics in nanoscale will be utilized for develop the LFHP materials and LED device. Hopefully, the result can break through the current efficiency record based on LFHPs. The multidisciplinary collaboration would also be instrumental in establishing design rules for nanoscale lead-free perovskite optoelectronics.