The organic side of electronics lies in the use of semiconducting plastics, conjugated polymers. The world's first organic transistor and the world's first chemical chip were developed at LiU. Different research groups are working in areas as diverse as energy storage and energy recovery, LEDs and solar cells, electronic plants and bioelectronics.

World-leading basic research at Linköping University goes hand in hand with applied research and development.  Close cooperation with RISE has led to several products in printed electronics reaching the market in record time, such as a biosensor that measures blood sugar levels and a simple battery tester. More products are in the pipeline.

In bioelectronics, organic electronics convert the body's chemical signals into traditional electronic signals or signals that can be read in mobile phones. The role of conjugated polymers as a tool for the early diagnosis of diseases is also being studied.

The Laboratory of Organic Electronics at LiU has an advanced cleanroom and there are printing machines in the nearby Printed Electronics Arena.

Together with colleagues in other universities, researchers in bioelectronics run networks and a company called OBOE IPR, which manages patents and other rights in the area.

Organic solar cells from the presses

In 30 years, organic solar cells have gone from basic research to practical use. One year from now, they will be commercially available. Professor emeritus Olle Inganäs gives us his thoughts.

The video is texted in English.

The material has been placed around a conducting fibre. In contact with an electrolyte, it expands to 100 times its volume when the first pulse, 0.8 V, is applied. When a pulse of -0.8 V is subsequently applied, it returns nearly to its original form. This can be repeated several times. Read more about the research here.

Inspired by the behaviour of natural skin, researchers at the Laboratory of Organic Electronics have developed a sensor that will be suitable for use with electronic skin. It can measure changes in body temperature, and react to both sunlight and warm touch. Read more about the research here

Eleni Stavrinidou leads a research group at the Laboratory of Organic Electronics working with electronic plants. The research, which has until now been financed by a free research grant from the Knut and Alice Wallenberg Foundation, has led to a completely new multidisciplinary field of research with a huge potential benefit to society.

The overall goal of our unit is to do basic science on topics that can have a positive impact on society. We do general surface physics and chemistry research related to e.g. energy materials, devices and catalytic processes.

We develop and study novel concepts based on the combination of unique features provided by conducting polymers and the exceptional light-matter interaction of plasmonic metal nanostructures.

Many electronic materials, in particular organic ones, can be turned into inks or pastes. This opens up exciting possibilities to fabricate electronic components and circuits by common printing methods.

The research of the Organic Nanoelectronics group focuses on the optoelectronic and transport properties of nano-scaled organic semiconductors.

Theory and modelling for organic electronics

The theoretical simulation and modelling of the basic properties of organic materials and devices represents the main focus of the research activity of our group.

Researchers at LiU have developed biosensors that make it possible to monitor sugar levels in real time deep in the plant tissues. The information from the sensors may help agriculture to adapt production as the world faces climate change.

Researchers at LiU have developed a proton trap that makes organic electronic ion pumps more precise when delivering drugs. In the long term, the ion pumps may help patients with symptoms of neurological diseases.

Researchers at the Laboratory of Organic Electronics have for the first time demonstrated an organic battery. It is of a type known as a “redox flow battery” that can be used to store energy from solar cells, and as a power bank for cars.

A combined optical transmitter and receiver

Researchers at LiU, together with colleagues in China, have developed a tiny unit that is both an optical transmitter and a receiver. “This is highly significant for the miniaturisation of optoelectronic systems”, says LiU professor Feng Gao.

Researchers at Linköping University, working with colleagues in Great Britain, China and the Czech Republic, have developed a perovskite light-emitting diode (LED) with both high efficiency and long operational stability.

Researchers at LiU have discovered a quantum phenomenon that influences the formation of free charges in organic solar cells. “If we can properly understand what’s going on, we can increase the efficiency”, says Olle Inganäs, professor emeritus.

Researchers at the Laboratory of Organic Electronics have developed optical nanoantennas made from a conducting polymer. The antennas can be switched on and off, and will make possible a completely new type of controllable nano-optical components.

At spin-off company Epishine, the printing presses are feeding out solar cells in printed electronics intended for indoor use. Olle Inganäs has an even higher goal: organic solar cells will contribute to solving the world’s energy problems. 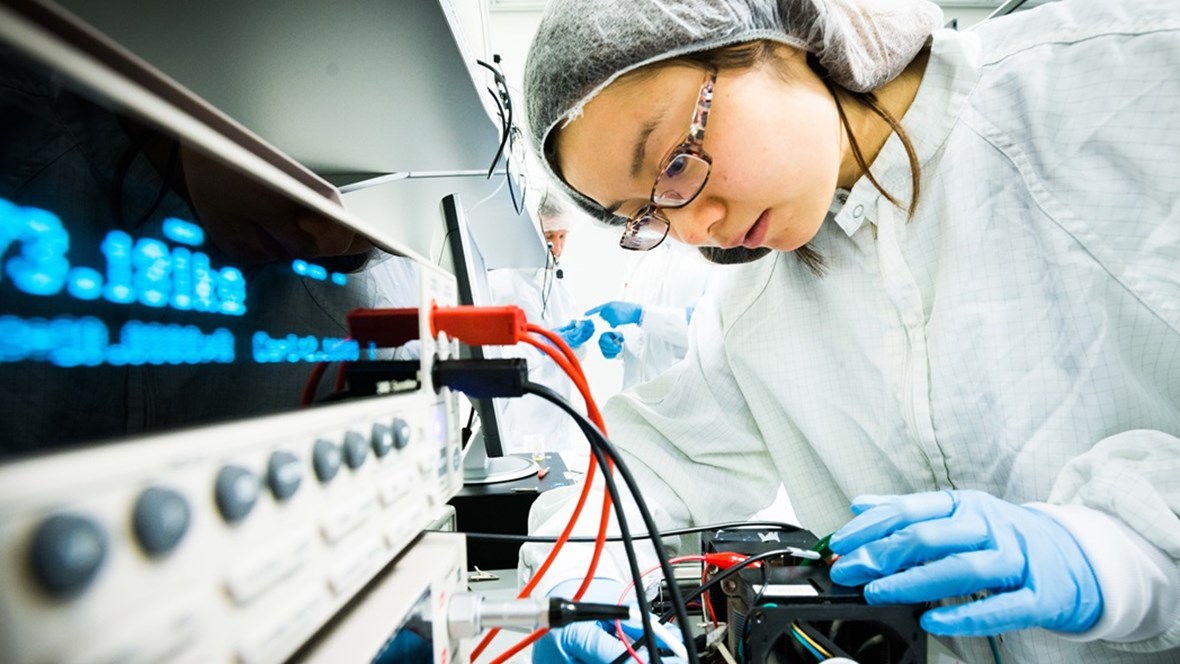