Abstract: A common problem in multivariate data is that the number of unknown parameters in a model can be close or even higher than sample size. This may cause problems in statistical inference. Therefore, models with special variance structure are studied by many authors, where the number of covariance parameters is reduced by some restrictions on parameter space. One of possible structure could be so called block compound symmetry (BCS) structure. In this talk we will be studying estimation and testing such a structure as well as test of mean values assuming BCS structure.

Sammanfattning: Investigating the differential effect of treatments in groups defined by patient characteristics is of paramount importance in personalized medicine. Group membership is typically determined by diagnostic devices or biomarkers, but such tools are not perfectly accurate. The impact of diagnostic misclassification or contamination in statistical inference has received only little attention in the literature. This work addresses the problem in a fully nonparametric setting. Nonparametric finite mixture is proposed for estimating and testing of meaningful yet nonparametric treatment effects. Consistent estimators and asymptotic distributions are provided for the misclassification error rates as well as treatment effects. Numerical examples show significant advantages of the proposed method in terms of bias reduction, coverage probability and power. The application of the proposed method is illustrated with data from asthma and sleep deprivation studies.

Sammanfattning: We present a data-adaptive multivariate histogram estimator of an unknown density f based on n independent samples from it. Such histograms are based on binary trees called regular pavings (RPs). RPs represent a computationally convenient class of simple functions that remain closed under addition and scalar multiplication. Unlike other density estimation methods, including various regularization and Bayesian methods based on the likelihood, the minimum distance estimate (MDE) is guaranteed to be within an L1distance bound from f for a given n, no matter what the underlying f happens to be, and is thus said to have universal performance guarantees (Devroye and Lugosi, Combinatorial methods in density estimation. Springer, New York, 2001). Using a form of tree matrix arithmetic with RPs, we obtain the first generic constructions of an MDE, prove that it has universal performance guarantees and demonstrate its performance with simulated and real-world data. Our main contribution is a constructive implementation of an MDE histogram that can handle large multivariate data bursts using a tree-based partition that is computationally conducive to subsequent statistical operations.

Sammanfattning: A moment constraint that limits the number of dividends in the optimal dividend problem is suggested. This leads to a new type of time-inconsistent stochastic impulse control problem. First, the optimal solution in the precommitment sense is derived. Second, the problem is formulated as an intrapersonal sequential dynamic game in line with Strotz' consistent planning. In particular, the notions of pure dividend strategies and a (strong) subgame perfect Nash equilibrium are adapted. An equilibrium is derived using a smooth fit condition. The equilibrium is shown to be strong. The uncontrolled state process is a fairly general diffusion.

Sammanfattning: We shall discuss a sequential Monte Carlo-based approach to approximation of weakly structural Markov graph laws on spaces of decomposable graphs, or, more generally, spaces of junction (clique) trees associated with such graphs. In particular, we apply a particle Gibbs version of the algorithm to Bayesian structure learning in decomposable graphical models, where the target distribution is a junction tree posterior distribution. Moreover, we use the proposed algorithm for exploring certain fundamental combinatorial properties of decomposable graphs, e.g. clique size distributions. Our approach requires the design of a family of proposal kernels, so-called junction tree expanders, which expand junction trees by connecting randomly new nodes to the underlying graphs. The performance of the estimators is illustrated through a collection of numerical examples demonstrating the feasibility of the suggested approach in high-dimensional domains.

Titel: Statistical Learning as a Compression Problem from the Information Theory Perspective

Sammanfattning: Although it was introduced in the context of communication theory, modern information theory provides us with a nonparametric probabilistic framework for statistical learning free from a priori assumption on the underlying statistical model. In this talk, I will discuss some of the information theory based methods for unsupervised and supervised learning. In particular, the soft (fuzzy) clustering problem in unsupervised learning can be viewed as a tradeoff between data compression and minimizing the distortion of the data. Similarly, modeling in supervised learning can be treated as a tradeoff between compression of the predictor variables and retaining the relevant information about the response variable. To illustrate the usage of these methods, some applications in biophysical problems and time series analysis will be addressed in the talk.

Sammanfattning: Muller's ratchet is the process by which asexual populations accumulate deleterious mutations in an irreversible manner. Most mathematical models have been of the Wright-Fisher type with fixed population size and relative fitness. In contrast, we use a branching process model with absolute fitness, leading to unavoidable extinction. Individuals are divided into classes depending on how many mutations they have accumulated, and we give results for the rate of the ratchet and the size of the fittest class. 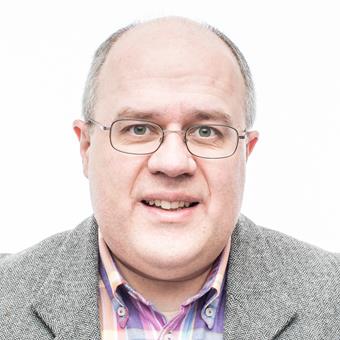