In this talk, I extend this result to non-porous sets and show that $d(x,E)^{-\alpha}$ is an $A_1$ weight, for some $\alpha>0$, if and only if $E$ is \emph{weakly porous}. During the talk, I will introduce the relevant concepts and for instance give examples of some non-porous sets which are weakly porous.

This talk is based on an ongoing joint work with Carlos Mudarra and Antti Vähäkangas.

Sammanfattning: Recently, we have investigated the phenomenon of native populations replacement by exotic ones, focusing on accidentally or intentionally introduced
species in Italy and UK. Two major cases are of interest. American grey squirrels are gradually outcompeting the indigenous red ones both in Italy and in UK. In the latter case, the situation is worsened by the presence of a virus, carried by the aliens, for which it is harmless, but which ultimately is found lethal for the native species. In Italy the European hare is slowly forcing the extinction of the native mountain hare. The main difference in this case is that the contacts among the two occur just on the boundary region of the territories occupied by the two species. This allows us to formulate a non-classical interaction model, based on the concept of herd behavior. The latter is extended to other possible situations, showing the onset of some new features in the phase space, revealing quite different results from the classical ones.
OBS! Lokal: C3

Titel: When is a rod configuration infinitesimally rigid?

Sammanfattning: The mathematical theory of structural rigidity has a long history. In the nineteenth century, Cauchy studied rigidity of polyhedra, and Maxwell studied graph frameworks. The rigidity theory of graph frameworks has since been studied extensively. Pollaczek-Geiringer, and later Laman, proved a combinatorial characterization of the minimally rigid graphs in the plane. Combinatorial rigidity theory is also concerned with geometric realizations of other combinatorial structures. A rod configuration is a realisation of a hypergraph as points and straight lines in the plane, where the lines behave as rigid bodies. In this talk, we will discuss approaches for determining whether a given rod configuration is infinitesimally rigid. This is based on joint work with Klara Stokes and Lars-Daniel Öhman.

Sammanfattning: In magnetic resonance imaging (MRI), it is possible to probe tissue on a sub-resolution level. The signal obtain by MRI is then formed by a family of diffusion tensors, with may have certain statistical properties. In this talk we are interested in characterising the second order moment of this family, which is a forth order tensor with certain symmetries.

In this talk I will consider similar facts on a complete metric space equipped with a doubling measure supporting a Poincaré inequality. I will explain how one defines Sobolev spaces (so-called Newtonian spaces based on upper gradients) and $p$-harmonic functions on metric spaces. I will then spend some time on how to define, and what should be meant, by $p$-harmonic Green functions and discuss their local integrability properties.

I will also try to give a few other examples where different growth rates coming directly from the measure appear naturally and are sharp. For unweighted ${\bf R}^n$ all these growth rates coincide (and are $n$), but this is not so in general.

Sammanfattning: Given a graph with a fixed vertex $v$, I shall demonstrate a construction of a partially ordered set whose elements are subsets of the neighbourhood of $v$. The motivation comes from the combinatorics of certain hyperplane arrangements known as inversion arrangements and their somewhat mysterious interplay with the geometry of Schubert varieties. An attempt at an overview for non-experts will be provided.

Sammanfattning: Taking seriously an apparently naive analogy between the multiplication of a not necessarily associative algebra and a covariant derivative operator leads to notions of partial and quantitative associativity modeled on various forms of curvature of a connection. Such notions identify classes of nonassociative algebras for which classification appears tractable and which include a diversity of interesting examples, including semisimple Lie algebras and their tensor products, semisimple Euclidean Jordan algebras, Griess algebras of vertex operator algebras (such as the Griess algebra of the monster finite simple group), and the algebra of metric curvature tensors with the Hamilton-Huisken product. These notions will be surveyed, focusing on the notions of projective associativity for commutative algberas and sectional nonassociativity for metrized commutative algebras,

Titel: On Laplacian growth in the plane and a conjecture of Gustafsson and Lin.

Sammanfattning: The Laplacian growth process of Hele-Shaw flow in the plane in the forward direction has been extensively studied for several decades now, where both classical as well as weak solutions to the moving boundary problem has been considered.

One major issue is that classical solutions will almost always break down in finite time. In their recent book Laplacian growth on branched Riemann surfaces Gustafsson and Lin considers the possibility, in the configuration of a simply connected initial domain and a point source, of extending the classical solutions to exist for all time by lifting them to a branched Riemann surface. Unfortunately, they got stuck on a technical problem and had to develop the theory based on the validity of a conjecture. Roughly speaking the problem in their construction is that one inevitably more or less at certain points in time will get to a situation that the boundary infinitesimally moves with infinite speed at some points, and the approach of classical solutions breaks down. The conjecture was then that the solution still exists and is simply connected for some small time interval. This conjecture was answered in the positive in the recent article On a conjecture of Gustafsson and Lin concerning Laplacian growth (TS and S.J. Gardiner). In this talk we will discuss the law of motion for the Hele-Shaw process, how it can be interpreted in terms of the Riemann map and finally discuss the conjecture of Gustafsson and Lin.

Titel: On phenomenon of Immobility in study of convex Optimization problems

Semi-Infinite Programming deals with extremal problems that consist in minimization of an objective function of finitely many variables in a set described by an infinite system of constraints. SIP models appear in different fields of modern science and engineering where it is necessary to simulate a behavior of complex processes whose models contain at least one inequality constraint for each value of some parameter (for example, time) varying in a given compact domain.
In Semidefinite Programming, an objective function is minimized under the condition that some matrix valued function is positive semidefinite. When the objective function is linear and the matrix valued function is an affine combination of some symmetric matrices, we get a convex problem. There are many applications of SDP models to combinatorial optimization, control theory, approximation theory, etc.

Optimality conditions for Optimization problems are of special interest both from theoretical and practical points of view. A special attention is devoted to the results that do not need additional conditions on the constraints, so called constraint qualifications (CQ).

In the talk, we present the results on optimality and strict duality for convex Semi-Infinite Programming problems which are obtained based on a new concept of immobile indices of constraints. We show how this concept can be applied to problems of linear SDP . The main result consists in new CQ-free optimality conditions for the considered classes of Optimization problems.

Sammanfattning: Extreme steady waves are exact solutions to Euler equations in two dimensions that posses surface singularities, where the relative velocity field vanishes. Already in 1880s Sir George Stokes made a remarkable for that time conjecture about extreme waves: the surface profile at singular points has to form a sharp corner of 120 degrees. This conjecture was very influential and had determined the research direction in the field for many years. In this talk we will discuss the history behind the problem and some recent new results obtained by the authors.

Sammanfattning: Capacities are outer measures and hence subadditive, but they are practically never additive. A capacity is called quasiadditive, if it satisfies a converse for the subadditivity (with a multiplicative constant) with respect to a suitable cover of the underlying set. In this talk I consider this property for the variational capacity in an open set of the Euclidean space, with respect to a Whitney cover of the open set. In particular, I will characterize a generalized (q,p)-version of the quasiadditivity using corresponding Hardy-Sobolev inequalities.

This talk is based on joint work with Juha Kinnunen and Antti Vähäkangas.

Sammanfattning: In this colloquium lecture an introductory overview and open problems about Hom-algebra structures will be given with emphasize on hom-algebra generalizations of Lie algebras and associative algebras.

Sammanfattning: We prove the nonexistence of two-dimensional solitary gravity water waves with subcritical wave speeds and an arbitrary distribution of vorticity. This is a longstanding open problem, and even in the irrotational case there are only partial results relying on sign conditions or smallness assumptions. As a corollary, we obtain a relatively complete classification of solitary waves: they must be supercritical, symmetric, and monotonically decreasing on either side of a central crest. The proof introduces a new function related to the so-called flow force which has several surprising properties. In addition to solitary waves, our nonexistence result applies to "half-solitary" waves (e.g. bores) which decay in only one direction.

This is a joint work with Vladimir Kozlov (MAI) and Miles H. Wheeler (University of Bath, UK).

Titel: Efficient use of hardware resources in avionic systems

Sammanfattning: A key ingredient when designing an avionic system – i. e. the electronic system of an aircraft – is to make sure that it always can be trusted. In modern integrated modular avionic systems, different aircraft functions share hardware resources on a common avionic platform. For such architectures, it is necessary to create a spatial and temporal partitioning of the system to prevent faults from propagating between different functions. One way to establish a temporal partitioning is through pre-runtime scheduling.

While the avionic systems are growing more and more complex, so is the challenge of scheduling them. Scheduling of the system has an important role when a new avionic system is developed. Typically, functions are added to the system over a period of several years and a scheduling tool is used both to determine if the platform can host the new functionality and, in case this is possible, to create a new schedule.

In this talk, I will discuss a design case from Saab Aeronautics and present an optimisation-based scheduling tool that we have developed. From an optimisation point of view, the problem can be described as a rich multiprocessor scheduling problem that also includes a communication network to be scheduled. Results are presented for practically relevant large-scale instances with up to 60 000 tasks.

Sammanfattning: Numerical methods to approximate the solution of partial differential equations are a powerful tool to model problems we otherwise could not. But can they tell us something even when they fail?

We present why numerical methods can break, and how to fix them. To do so, we motivate the discussion from a physical perspective, which we then translate and inspect with the language of mathematics. 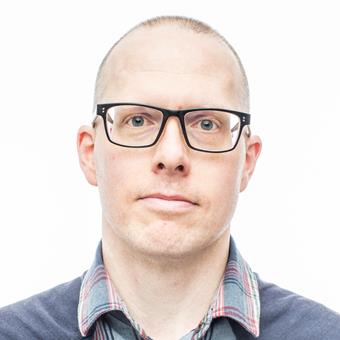