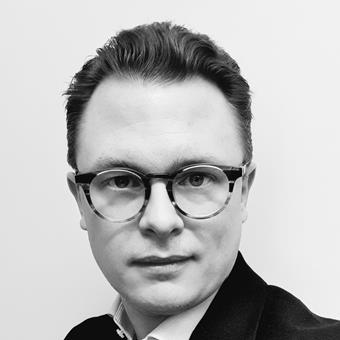 Algebraic aspects of geometry is the main theme of my research. In particular, I'm currently interested in Riemannian aspects of non-commutative geometry, as well as the role of Poisson algebras in differential and algebraic geometry.

We are accustomed to think of geometric objects as a concrete subsets of three-dimensional space, such as lines, discs and spheres. These objects are usually studied as a collection of points for which one may introduce more or less advanced tools in order to discover properties and relations among them.  For instance, one can measure the distance between two points or study how much a curve bends as we follow it through space.

There is a, perhaps lesser-known, complementary picture, in which focus is put on  functions from the object to the real (or complex) numbers, rather than the object itself. It may be surprising that, in many cases, knowing all such functions completely determines the originial geometric object. The collection of these functions is an algebra (i.e. one may add and multiply two functions and get a new function), and it actually possible to formulate our usual concepts of geometry in a purely algebraic way.

This opens up for a more abstract way of thinking of geometry. In fact, what happens if one does not care about if the algebra at hand comes from a geometric object or not? Can one still do "geometry"? Turning the question around, is it possible to attach a geometric object to every algebra? During the 20th century, the field of algebraic geometry has studied these questions and developed a powerful machinery to handle algebraic aspects of geometry.

Unfortunately, it may happen that one finds a geometric obejct for which there are extremely few interesting functions. In fact, too few to say anything useful. However, it turns out that if we allow the values of the functions to be operators, rather that numbers, a manifold of interesting functions presents itself. This trick certainly comes with a price: multiplication of functions is no longer commutative. That is, since the result of applying two operators is dependent on the order in which the are applied, the order of multiplication of operator-valued functions is important. Thus, the result is that one have to try to understand the geometry of a non-commutative algebra; a field which is known as non-commutative geometry.  Suprisingly, at least from a naive point of view, it is possible to formulate many concepts of geometry also for non-commutative algebras. In particular, a far reaching and powerful generalization of topology, in the context of C*-algebras, has been carried out with applications in many fields of mathematics.

Workshop in Algebra and Noncommutative Geometry

The main themes lie within the area of noncommutative/nonassociative algebra and noncommutative geometry. The workshop is the first meeting of the Swedish Network for Algebra and Geometry and takes place 27-28 September 2018 at Linköping University.

Workshop in Algebra and Noncommutative Geometry

Continue to DOI
Joakim Arnlind, Mitsuru Wilson (2017) On the Chern-Gauss-Bonnet theorem for the noncommutative 4-sphere JOURNAL OF GEOMETRY AND PHYSICS , Vol. 111 , s. 126-141